1. Seasonal Streams
Q. Why is the TRRS so concerned with streams that dry up in the summer?
A. Towhee Creek, Portuguese Creek and Smit Forsythe Creek are the streams in the watershed with the most critical low summer flows.  These streams support significant populations of spawning salmon. The fish enter these tributaries and  lay their eggs after fall rains replenish flows.  The eggs hatch in the spring and as the streams dry in mid-May, the fry make their way downstream to the Tsolum and out to the ocean.

These seasonal streams are, surprisingly, the  most productive of all the streams in the system. During the dry period they "store" energy in the form of microorganisms. These microorganisms are processing organic material all summer under the dry stream bed. When fall rains arrive and increase flows there is a  "nutrient pulse" that feeds the entire river. Incoming spawning adults appear to "smell" this nutrient pulse and make a beeline up these streams that were completely bone dry only weeks before.

The projects we have and are doing on these streams are attempting to make them more fry friendly. We look for physical obstructions to their desire to get out before the stream dries and we look for opportunities to store water in ponds to hydrate the surrounding areas as they dry.

In 2010 a gravel cover was laid on the membrane and a soil cover was then laid on the gravel. Towards the end of the work window (October 2010) large woody debris (slash and root wads) were salvaged from nearby logging operations and placed into the soil cover. Grasses and alder trees were planted just before operations were shut down due to weather.

We thank the Province of BC for the $4.5 million dollars to comlete the project and end the pollution from the old mine forever. We also want to thank TimberWest for their cooperation, access and assistance in completing this project on their private forest land.

We'd like to remind the public that, while hiking is fine, driving and using ATVs on the mine site is prohibited. Driving over the membrane will cause damage and create the potential of leaching.

3. Water Quality
Q. How are the copper levels in the river doing?
A. Copper Levels are under control!

Since the installation of the geomembrane and soil cover there has not been one reading over our targets!
4. Stocks
Q. Are fish coming back?
A. Pink stocks were enhanced at the Tsolum Hatchery on Headquarters Creek from 1999 tol 2013, with releases of one million fry each year. The Puntledge Hatchery has also released a million pinks over several of these years in addition to the fry we release. Even with all this effort we are seeing huge variations in returning pinks.

The number of Pinks returning each year are difficult to predict, and are not stable, because of several factors (unrelated to the acid mine drainage leaching). With climate change rivers are experiencing lower flows and higher temperatures in summer, which impacts spawning fish and fry. In addition, Pinks observe an odd/even year cycle; their numbers are never stable. 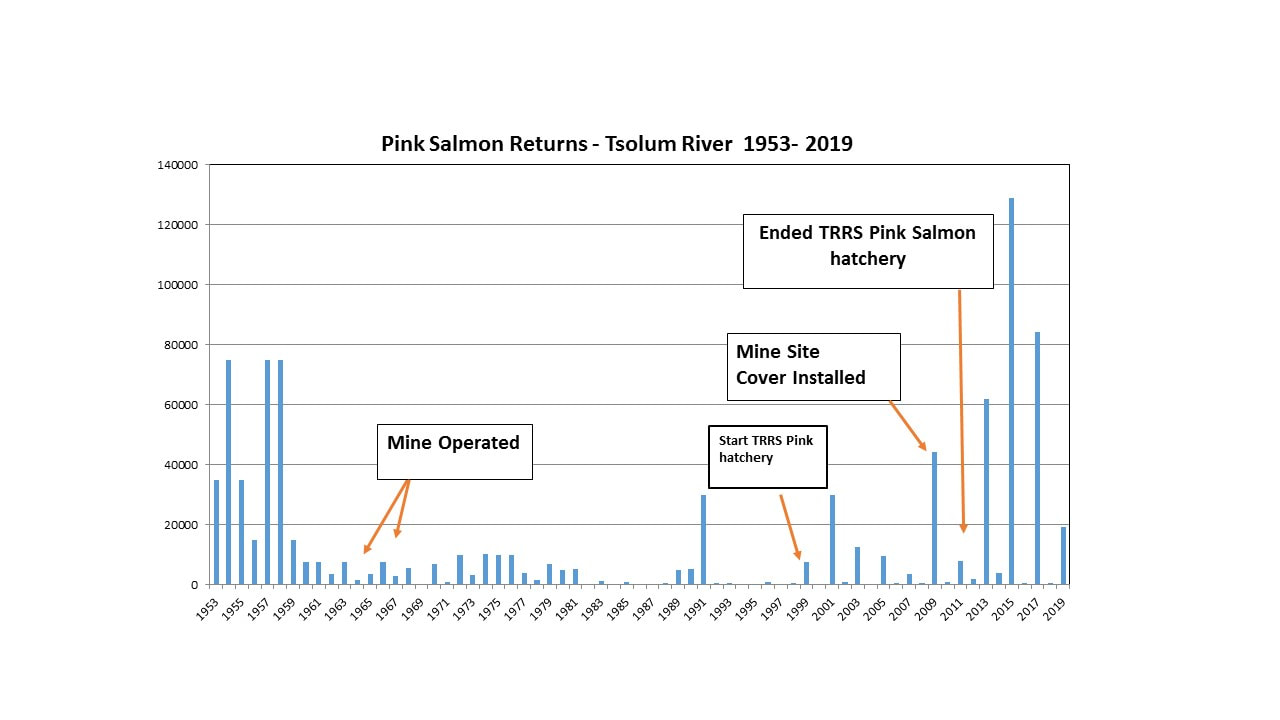